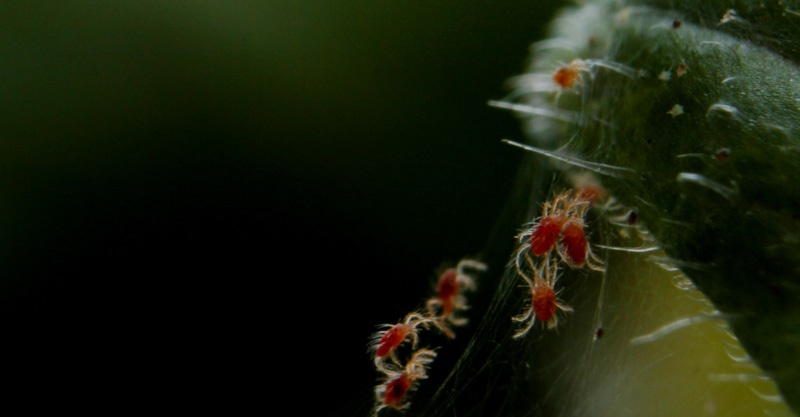 Our research lies at the intersection between Ecology and Evolution. We aim at addressing the short-term evolutionary changes in populations, in ecologically-relevant scenarios. We use spider mites as a research model, tiny spider-like arthropods that cause severe damage to several crop plants (tomato, bean, cucumber, citrus, strawberry, etc). We use a combination of behavioural and ecological lab experiments, coupled with field sampling and Experimental Evolution, which allows following the evolutionary trajectories of populations in real time.

The evolution of competition among herbivores

The spider mites Tetranychus urticae and T. evansi co-occur on tomato. This plant can accumulate different amounts of cadmium in its aerial parts, creating a heterogeneous environment for the mites. We are investigating the consequences of this heterogeneity for the outcome of competition, and how it interacts with other ecological factors such as plant defences. This information will allow testing how evolution in different environments affects intra and interspecific competition in spider mites.

The ecological consequences of plant-mite interactions

Whereas T. urticae induces plant defences, as most herbivores, T. evansi suppresses these defences on tomato. We are studying whether this ability is modified by the environment or by the evolutionary history of the mites.

Intraspecific trait variation and their correlation may affect the ecology and evolution of species coexistence. We are addressing (a) the potential correlation between variation in growth rates and carrying capacity, among reproductive traits and between behavioural and life-history traits (in spiders); (b) how individual variation in reproductive interference, niche width and in defence manipulation affects species coexistence.

In spider mites, the first male sires virtually all the offspring. However, spider mites still mate multiply. We are investigating this paradox from several angles, from the mechanistic basis of mate recognition to the eco-evolutionary implications of first male precedence. We are also studying whether this pattern of sperm precedence is modified by temperature and what are the implications thereof.

Godinho, D.P., Branquinho, C. & Magalhães, S. (2022) Intraspecific variability in herbivore response to elemental defences is caused by the metal itself.

Rodrigues, L.R., Zélé, F., Santos, I. & Magalhães, S. (2022) No evidence for the evolution of mating behavior in spider mites due to Wolbachia-induced cytoplasmic incompatibility,