The impact of nitrogen pollution on ecosystems: Roland Bobbink interviewed for cE3c 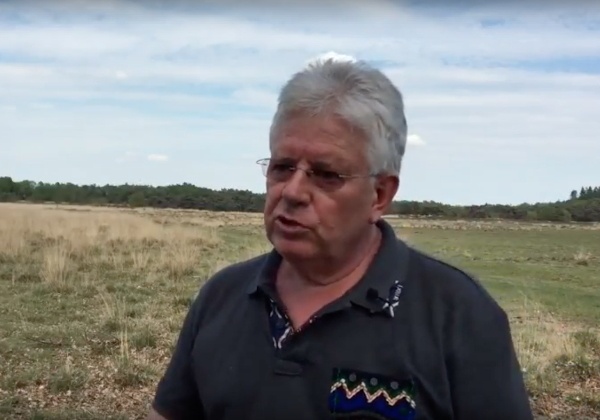 Roland Bobbink, Senior Researcher in Ecology and Biogeochemistry at the B-WARE Research Center (Radboud University, The Netherlands), visited cE3c earlier this year as invited expert in a multi-country meeting on monitoring the impact of air pollution on Mediterranean ecosystems, as a new European Commission directive (NEC, 2016/2284) establishes new national emission limits for the Member States of the European Union for nitrogen oxides (NOx), volatile organic compounds (with the exception of methane), sulfur dioxide (SO2), ammonia (NH3) and fine particles.

Studying the problem of nitrogen pollution since the 1980s, Roland Bobbink has been carrying out pure and applied research into the ecological consequences of environmental degradation in several ecosystems and contributing to several interface meetings of science and policy as an expert on the effects of pollution on ecosystems.

In this interview, Roland Bobbink discusses the impact of these pollutants on ecosystems, the implementation of this new European Commission directive and his expectations for the meeting that took place on the Faculty of Sciences of the University of Lisbon, organized by cE3c.

What are the known consequences of these pollutants for the ecosystems? In particular nitrogen, in which you have focused your research.

Nitrogen is really important in ecology, but there are a lot of consequences if you have nitrogen in excess. They do not become clear in one year – some processes are long-term and may take decades – but in general you can have five or six main effect pathways.

A direct effect is of course toxicity, when you have high concentration of ammonia or nitrogen oxides in the air. That does not occur so much nowadays. Lichens are very sensitive to the ammonia concentration in the air and can be used as indicators.

Nitrogen is also one of the main nutrients for plants, widely used as a fertilizer. Another long-term effect you can see after five or ten years is when fertilizers are used in excess, when in many cases you get a shift in competition: some plant species grow fast, but then the smaller plants do not get light and will not grow, and you get a decline in species richness.

Another long-term effect which comes not only from nitrogen deposition but also from silver deposition is the acidification of soil or water. If you have long-term - you can say decades - of high air pollution, you see a decline of calcium, potassium and magnesium in the soil. These nutrients are important for plants to grow, so you get nutrient imbalance. And this excess in nitrogen and imbalance of other nutrients can also have cascading effects in the food web.

So, this is a very complex problem.

Yes, that is the problem with nitrogen. Of course, it is a very important element for ecosystem functioning. And you have different forms of nitrogen: in the atmosphere for example you have 80% of N2 – but that is inert.

You also have different sources of nitrogen pollution. You have nitrogen coming from combustion of fossil fuels – NO2, nitrogen dioxide, which is common in the air and in the rain and it is also a fertilizer, plants can use it. But you also have animals producing manure: in there you also have a lot of nitrogen, in the form of ammonia, NH3, and there are plants which are not used to use ammonia.

And when it comes to interaction in the food web, it is very difficult to make a general picture of that. For example, snails need calcium to build the shell, and when you don’t have enough calcium in the soils you don’t have snails. And that can affect birds, which usually eat snails: you then see birds with weak bones, weak wings, and the eggs crack because the shell is too weak. But it always depends on the system, so it is very difficult to say: there are lot of interactions, at several time scales.

The most recent directives from the European Commission are once again recommending lowering the emission of these pollutants. The consequences of these reductions can be seen immediately or just in a longer time-scale?

There is a very large reduction, by maybe more than 90%, of silver dioxide: that was because of acid rain problems in the 1980s and 1990s, which led to a joint effort in Europe and also in the USA and Canada. There are hardly any silver dioxide emissions now, and as a consequence you see there is less acidification in alpine lakes, there is a recovery.

As for nitrogen, it depends on where you are. There is a little reduction in the emission of nitrogen oxides, because of the use of cleaner coals or the use of gas instead, but on the other hand there is much heavier traffic using diesel. As for reduced nitrogen, until now there was no reduction at all in Portugal – because it is common from agriculture, and the control of agricultural activity is very difficult. In the Netherlands we identified this problem much earlier, because we had very intense agriculture in the 1970s, with high ammonia emissions – and finally in the early 1990s there were measures which lead to a reduction of nitrogen deposition of 30% to 40%. That is the highest reduction in Europe.

It was very significant, but the consequences are still not away. When the nitrogen excess exceeds the critical load of ecosystems, even when there is reduction you have long-term effects. Most ecosystems accumulate nitrogen, and they will keep it – because it is normally scarce, and plants and soil are used to keep it in the system. When you have fifty years of excessive nitrogen, the effects will not disappear in two or three years – maybe not even in fifty or one hundred years. And sometimes you need active restoration: in the Netherlands we have a lot of restoration in nature because of this.

Now focusing on this workshop. You have a lot of experience in interface meetings of science and policy. What were your expectations and what do you think are the common challenges of these countries and the good practices that can be shared?

My expectations were not really high for this meeting because the ecological monitoring of consequences of nitrogen air pollution is a really expensive topic, and many governments do not like that – to pay to look at ecological impacts, because it is “only nature”.

I have been working on the nitrogen problem, and restoration and recovery, since the early 1980s, and even in the Netherlands it cost a lot of time to get a good monitoring system to follow the deposition and the ecological effects. I think you can learn from what we already know. But many times, in a country they can come up with a nice plan and after, say, one year, the government will say there is no money. It can also be the problem with the outcome of this meeting, despite the fact that it gathered a very stimulating group of people.

This new start for a new directive will cost time, it can be four or five years before a monitoring system can be fully implemented. And every country has to look for its own funding – you do not get it from the European Commission, it is the responsibility of each country. And then governments can consider “oh, Nature is not so important”, which is the pity of a meeting like this. I knew that already, that’s not a surprise. It is good that there is a lot of attention from the European Commission also for this kind of air pollution, and it is important that southern countries also look for it – but to really monitor it, you can only do it if you put money on it.

The situation in Portugal with respect to nitrogen is not so worse as it was in the Netherlands. So, I hope that Portugal, and in general the southern countries, where the problem is only starting to develop, can try to control it in the beginning. And not just afterwards, as we did.