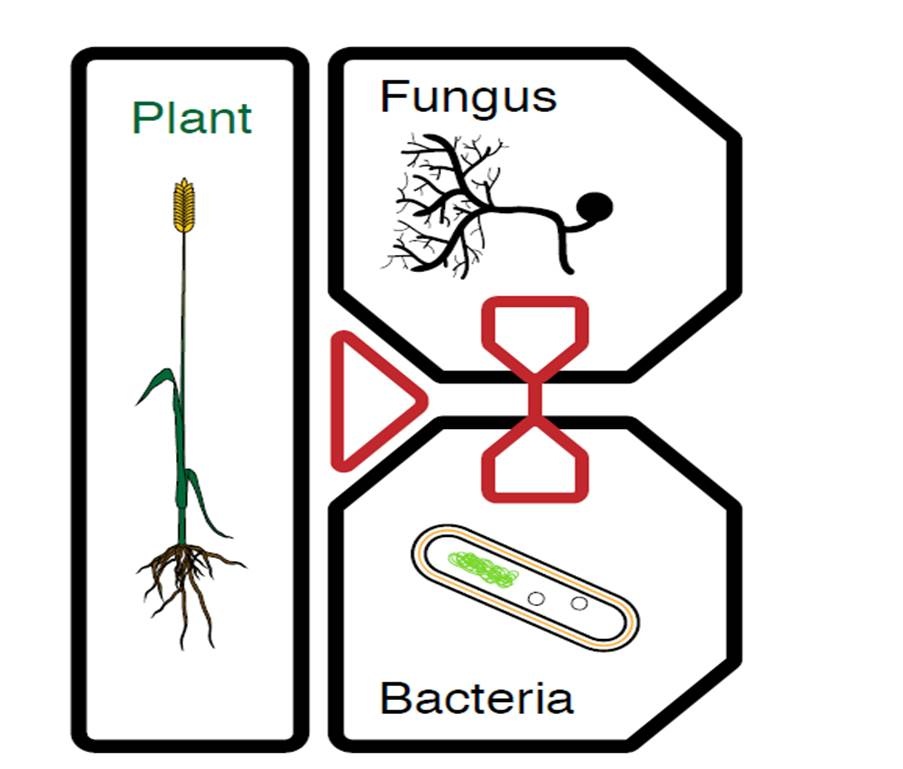 
• Increasing crop productivity while ensuring food security and decreasing the environmental impacts of agriculture is a major challenge for the coming decades.

• In the XX century, increased productivity was mainly achieved through improvement of crop varieties and increased use of inorganic fertilizers and pesticides. Although successful, the long-term

sustainability of the strategy is debatable mainly due to its environmental impacts.

• The question we face is: how can the Earth provide food security for the growing human population, and continue to be a safe place for humanity? The BioClub team believes that the next steps towards a sustainable agriculture require understanding the networks, which regulate the distinct components of the agrosystem. No organism is an island; all the phenotypes observed are the product of the interplay of millions of organisms that express their genotypes in very dependent and regulated ways. Agrosystem management has to take into consideration that the symbiotic lifestyle is the norm. Therefore we have to provide crops with nutrients, but also with agents able to regulate the fate of those nutrients. The most obvious regulator agents are rhizospheric microorganisms, some of which are well known plant growth promoters (PGPM– improve nutrient use efficiency – NUE, plant defence, productivity, food quality), and are already used as biofertilizers.

The global demand for biofertilizers was valued at 392 million € in 2012 and is expected to reach 917 million € in 2019 according to the Global Industry Analysis, 2014. However there are certain problems associated with their use and design: they are generally specific for crop, soil type and weather conditions; those with higher NUE are expensive; and most are designed without considering rhizospheric socialization (which adds to variability of the benefits).

• BioClub advocates that biofertilizer efficiency (in NUE, plant defence, productivity, food quality) may be much improved if, in addition to microbial agents (fungi and bacteria), the factors that strengthen the symbiotic relations between the partners are also considered in biofertilizer formulation. BioClub will take advantage of well known and characterized PGPMs (Glomus intraradices or Piriformospora indica, and Azospirillum brasilense) and will focus on the interplay between the microbial agents (fungi and bacteria) and the plant: plant exudome (wheat varieties), biofilm production (natural stimulation and stimulation by autoinducer-like substances), and lifestyle3 (associative versus endophytic), in order to produce an efficient and affordable biofertilizer prototype BioClub (Task 1).

• We expect that the proof of concept (pot and field trials) will show that a stronger symbiotic relationship between the plant and the biofertilizer (higher biofilm formation in presence of the endophytic A brasilense) will: 1) at the scientific level be more beneficial to the plant; and 2) at the technical level allow the formulation of a biofertilizer compatible with European guidelines for reducing the recommended dose of mineral fertilization by 30% (Tasks 2 and 4); improve plant tolerance to moderate pathogen attack (Task 3); present consistent benefits across distinct abiotic conditions (temperature and water availability, Task 2).

• In order to achieve its goals, BioClub has a transdisciplinary team with specialists in crop productivity (A de Varennes, Castro Pinto), plant-soil ecology (L Carvalho, A Silva), microbiology (R Tenreiro, M Carolino), environmental impacts of agriculture (MT Dias), molecular biology and plant physiology (A Distelfeld) and NGS techniques (F Caeiro, L Martinez), companies producing synthetic fertilizers (ADP) and biofertilizers (AMC, Soilvitae) and endusers (Cimmyt, EPP). The results obtained will be disseminated through: publication of manuscripts (scientific level); pilot production of the biofertilizers to be distributed to volunteer farmers associated with the companies and end users associated with BioClub; and using the field trials as natural-labs open to demonstrations and proofs of concept.

• The BioClub proposal does not stand alone, it capitalizes the knowhow, results and networking built within previous and on going projects “Rhizospheric microbial consortia to increase nutrient use efficiency. A tool to be used in intensive farm systems” (PTDC/AGRPRO/115888/2009); ”Cooperation in mutualisms: the role of bacterial social relations” (SFRH/BPD/33633/2009), “Mutualisms in traditional cropping systems: managing its diversity to improve symbiotic functioning, soil fertility and food quality” (SFRH/BD/75316/2010); “New Microbial Inoculants for Pasture in AgroForestryPasture Systems” (PRODER 4.154972); and (at the international level) Cimmyt, as part of the wheat initiative