Scientists warn: the unique biodiversity of islands is in peril! 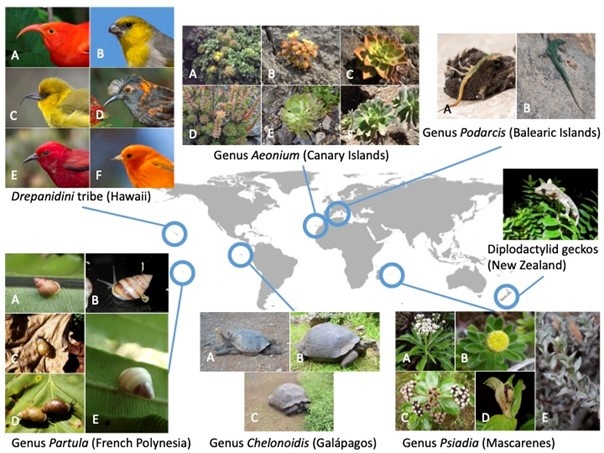 Islands contribute disproportionally to global biodiversity. Not even covering 7% of the global surface area, islands harbor around 20% of the plant and animal species on Earth, but also 50% of all species threatened of extinction and 75% of all documented species extinctions in modern times! In a paper recently published in Global Ecology and Conservation, the board members of the newly founded Society of Island Biology (SIB) assess the condition of biodiversity on islands worldwide. Unfortunately, species and ecosystems on islands are severely under pressure by human actions.

As a result of the isolation from the continent unique plant and animal species have evolved on islands, so-called endemic species that only occur on their respective island or archipelago. Endemic species are often particularly threatened by habitat destruction (e.g., the conversion of natural habitat to agricultural areas), by overexploitation of natural resources, the introduction of non-native and invasive species and climate change. For various reasons (small population sizes, limited distribution ranges, but also lacking adaptation to introduced species) Island biota are especially vulnerable to changes undertaken by humans. This increased vulnerability has culminated in at least 800 island species being irrevocably lost in the last 500 years alone. In fact, it is 12 times more likely for an island species to go extinct than a mainland species! If we continue like this, it is obvious that islands will bear the brunt of future extinctions.

For this reason, the SIB (founded in 2020) considers itself a voice to represent the interests of species on islands. In the article the authors around the president of the SIB, Prof. José María Fernández-Palacios from the University of La Laguna, Tenerife (Spain), suggest specific measures to prevent further extinctions and to balance the needs of nature conservation with those of the local populations on islands. On the one hand, it is important to create an extensive inventory of all island species, so that scientists but also society know which actually occur in which locations. For many species groups and islands this is still not the case, which substantially impedes precise and effective conservation measures! On the other, targeted nature conservation measures need to be undertaken to protect highly threatened species and their natural habitat. To achieve this, it is important to restore degraded habitat, including the management of invasive species, because natural habitat is becoming more and more rare on many islands, while islands are often dominated by invasive species. However, it is imperative that such measures are embedded in a socio-ecological context under consideration of the needs of the local island communities that should build local conservation capacity so communities can act as stewards of biodiversity.

Figure 1: Iconic examples of the outstanding and unique biodiversity found on islands worldwide