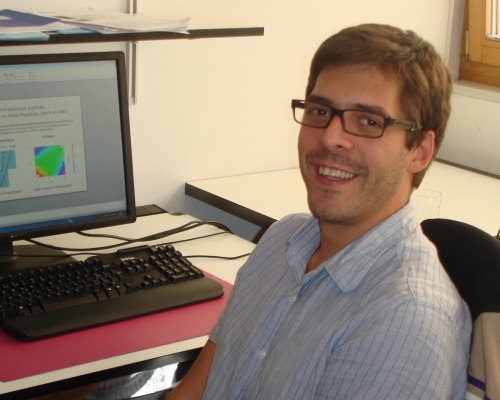 I conducted my Ph.D. at the Gulbenkian Science Institute (IGC, Oeiras, Portugal) and received my degree from the University of Lisbon in 2010. I was then a postdoctoral researcher in Jody Hey’s lab (Rutgers University, New Jersey, USA) from 2010 to 2013, and in Laurent Excoffier’s lab (University of Bern and Swiss Institute of Bioinformatics, Switzerland) from 2013 to 2016. I am currently an invited Researcher at the cE3c aiming to address biological questions arising in the fields of speciation, conservation, molecular ecology and human genetics from a population genomics perspective.

My research aims at characterizing the interplay between demographic processes (e.g. gene flow, bottlenecks, population expansions) and natural selection in the structure and divergence of populations. In particular, I am interested in answering fundamental questions such as: (i) How do demographic processes affect the ability of populations to adapt? (ii) How does the interplay between demographic processes, natural selection and recombination shape the observed genomic patterns? With the growing availability of population genomics data we have now the unprecedented opportunity to answer these questions. However, the answers depend upon theoretical models and computational methods to extract information from such genomic data.

My research is focused on theoretical modelling and development of bioinformatics methods to reconstruct demographic events (e.g., migration, population contractions) and to detect the genomic signatures of natural selection. My work is interdisciplinary and integrates population genetics theory, modeling, statistics and data analysis. For instance, I have developed approximate Bayesian computation (ABC) methods to study population admixture, full likelihood methods to study population divergence and detect the effects of natural selection, and composite likelihood methods to quantify levels of gene flow and date the divergence of populations. I have applied these methods to address biological questions from different areas and several organisms, such as human genomics (e.g. reconstructing human dispersal events), conservation genetics (e.g. characterizing the population structure of freshwater fish and lemurs with fragmented habitats), speciation (e.g. hybrid zones of European rabbits, radiation of cichlids from lake Victoria and divergence of chimpanzees) and to study the genetic basis of adaptation (e.g. coat color adaptation in deer mice and lizards). Characterizing the genomic processes involved in the divergence of populations will not only allow us to ultimately understand how biodiversity is generated and maintained, but also help us understand how species cope with present day challenges due to environmental changes, invasive species, range shifts and habitat fragmentation.

Currently, I am working on combining theory and statistical methods to understand what evolutionary processes generated observed genomic pattersns. I am particularly focused on the interation of gene flow, local adaptation and recombination. To understand these processes at the genome level, I am involved in projects generating population genomic data from different taxa, ranging from spider-mites (Tetranychus spp.), sawflies (Neodriprion spp.) to endemic Iberian freshwater fish and humans.