The effects of nectar robbing, secondary metabolites and floral cues on foraging in sunbirds 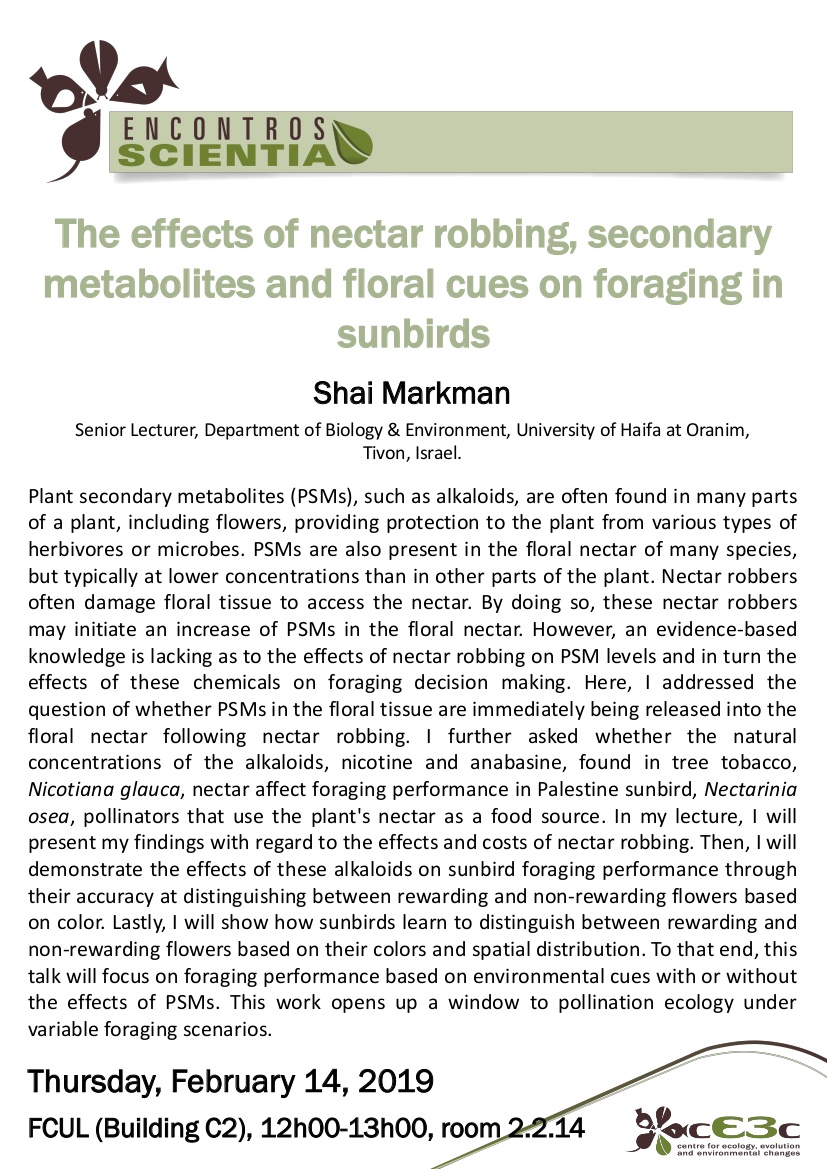 The effects of nectar robbing, secondary metabolites and floral cues on foraging in sunbirds

Plant secondary metabolites (PSMs), such as alkaloids, are often found in many parts of a plant, including flowers, providing protection to the plant from various types of herbivores or microbes. PSMs are also present in the floral nectar of many species, but typically at lower concentrations than in other parts of the plant. Nectar robbers often damage floral tissue to access the nectar. By doing so, these nectar robbers may initiate an increase of PSMs in the floral nectar. However, an evidence-based knowledge is lacking as to the effects of nectar robbing on PSM levels and in turn the effects of these chemicals on foraging decision making. Here, I addressed the question of whether PSMs in the floral tissue are immediately being released into the floral nectar following nectar robbing. I further asked whether the natural concentrations of the alkaloids, nicotine and anabasine, found in tree tobacco, Nicotiana glauca, nectar affect foraging performance in Palestine sunbird, Nectarinia osea, pollinators that use the plant's nectar as a food source. In my lecture, I will present my findings with regard to the effects and costs of nectar robbing. Then, I will demonstrate the effects of these alkaloids on sunbird foraging performance through their accuracy at distinguishing between rewarding and non-rewarding flowers based on color. Lastly, I will show how sunbirds learn to distinguish between rewarding and non-rewarding flowers based on their colors and spatial distribution. To that end, this talk will focus on foraging performance based on environmental cues with or without the effects of PSMs. This work opens up a window to pollination ecology under variable foraging scenarios.

I am a behavioral and chemical ecologist interested in the evolutionary ecology of infochemicals and behavioral strategies of organisms. Specifically, my research programs include studying the effects of pollutants and secondary metabolites on the behavior and ecology of birds, behavioral ecology of competition, foraging strategies and parental care in birds.