How vulnerable are cetaceans to climate change? Developing and testing a new index 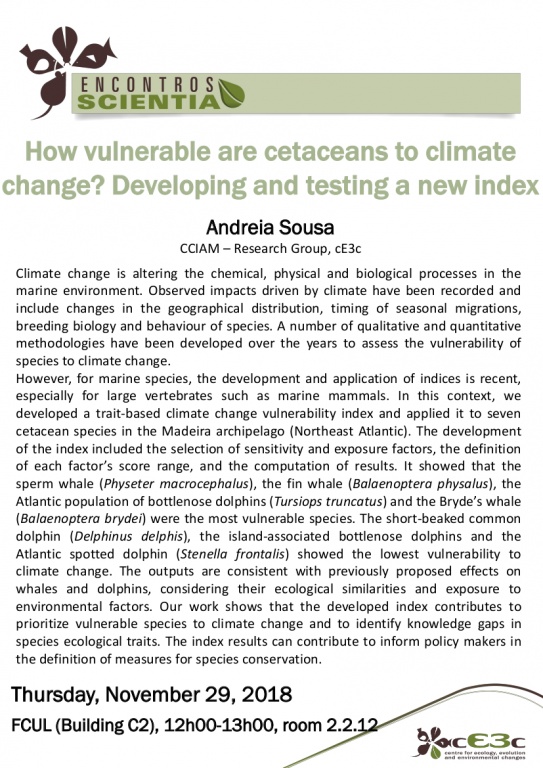 How vulnerable are cetaceans to climate change? Developing and testing a new index

Climate change is altering the chemical, physical and biological processes in the marine environment. Observed impacts driven by climate have been recorded and include changes in the geographical distribution, timing of seasonal migrations, breeding biology and behaviour of species. A number of qualitative and quantitative methodologies have been developed over the years to assess the vulnerability of species to climate change.

However, for marine species, the development and application of indices is recent, especially for large vertebrates such as marine mammals. In this context, we developed a trait-based climate change vulnerability index and applied it to seven cetacean species in the Madeira archipelago (Northeast Atlantic). The development of the index included the selection of sensitivity and exposure factors, the definition of each factor’s score range, and the computation of results. It showed that the sperm whale (Physeter macrocephalus), the fin whale (Balaenoptera physalus), the Atlantic population of bottlenose dolphins (Tursiops truncatus) and the Bryde’s whale (Balaenoptera brydei) were the most vulnerable species. The short-beaked common dolphin (Delphinus delphis), the island-associated bottlenose dolphins and the Atlantic spotted dolphin (Stenella frontalis) showed the lowest vulnerability to climate change. The outputs are consistent with previously proposed effects on whales and dolphins, considering their ecological similarities and exposure to environmental factors. Our work shows that the developed index contributes to prioritize vulnerable species to climate change and to identify knowledge gaps in species ecological traits. The index results can contribute to inform policy makers in the definition of measures for species conservation.