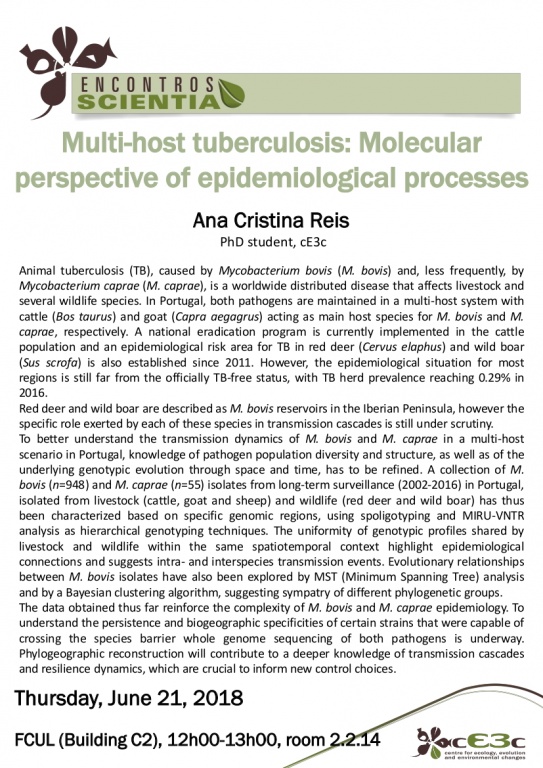 Animal tuberculosis (TB), caused by Mycobacterium bovis(M. bovis) and, less frequently, by Mycobacterium caprae(M. caprae), is a worldwide distributed disease that affects livestock and several wildlife species. In Portugal, both pathogens are maintained in a multi-host system with cattle (Bostaurus) and goat (Capra aegagrus) acting as main host species for M. bovisand M. caprae, respectively. A national eradication program is currently implemented in the cattle population and an epidemiological risk area for TB in red deer (Cervuselaphus) and wild boar (Susscrofa) is also established since 2011. However, the epidemiological situation for most regions is still far from the officially TB-free status, with TB herd prevalence reaching 0.29% in 2016.

Red deer and wild boar are described as M. bovisreservoirs in the Iberian Peninsula, however the specific role exerted by each of these species in transmission cascades is still under scrutiny.

To better understand the transmission dynamics of M. bovisand M. capraein a multi-host scenario in Portugal, knowledge of pathogen population diversity and structure, as well as of the underlying genotypic evolution through space and time, has to be refined. A collection of M. bovis(n=948) and M. caprae(n=55) isolates from long-term surveillance (2002-2016) in Portugal, isolated from livestock (cattle, goat and sheep) and wildlife (red deer and wild boar) has thus been characterized based on specific genomic regions, using spoligotyping and MIRU-VNTR analysis as hierarchical genotyping techniques. The uniformity of genotypic profiles shared by livestock and wildlife within the same spatiotemporal context highlight epidemiological connections and suggests intra- and interspecies transmission events. Evolutionary relationships between M. bovisisolates have also been explored by MST (Minimum Spanning Tree) analysis and by a Bayesian clustering algorithm, suggesting sympatry of different phylogenetic groups.

The data obtained thus far reinforce the complexity of M. bovisand M. capraeepidemiology. To understand the persistence and biogeographic specificities of certain strains that were capable of crossing the species barrier whole genome sequencing of both pathogens is underway. Phylogeographic reconstruction will contribute to a deeper knowledge of transmission cascades and resilience dynamics, which are crucial to inform new control choices.