The dynamics and evolution of hepatitis C virus in vivo 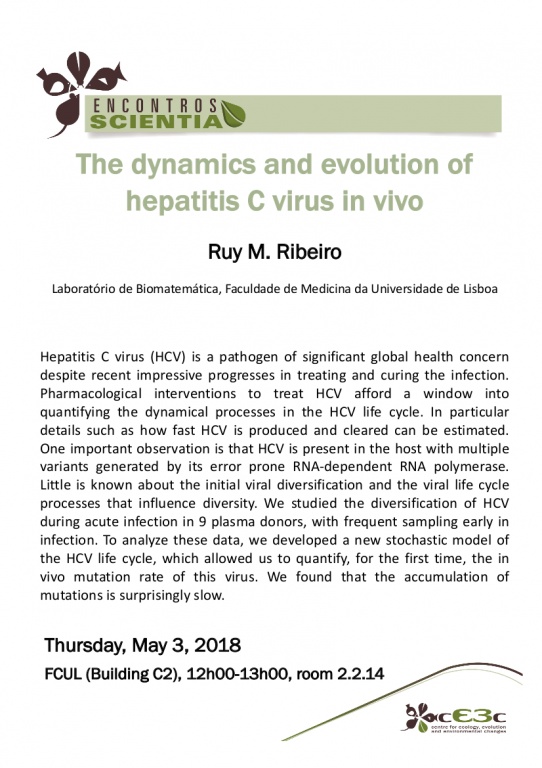 The dynamics and evolution of hepatitis C virus in vivo

Hepatitis C virus (HCV) is a pathogen of significant global health concern despite recent impressive progresses in treating and curing the infection. Pharmacological interventions to treat HCV afford a window into quantifying the dynamical processes in the HCV life cycle. In particular details such as how fast HCV is produced and cleared can be estimated. One important observation is that HCV is present in the host with multiple variants generated by its error prone RNA-dependent RNA polymerase. Little is known about the initial viral diversification and the viral life cycle processes that influence diversity. We studied the diversification of HCV during acute infection in 9 plasma donors, with frequent sampling early in infection. To analyze these data, we developed a new stochastic model of the HCV life cycle, which allowed us to quantify, for the first time, the in vivo mutation rate of this virus. We found that the accumulation of mutations is surprisingly slow.

Ruy Ribeiro studied Engineering Physics at Instituto Superior Técnico in Lisbon. He then worked on his PhD degree at the Zoology Department of the University of Oxford, UK, under Prof. Martin Nowak (now at Harvard) and Lord May of Oxford. In 2000, he accepted a postdoctoral position at Los Alamos National Laboratory, New Mexico, where he became a staff scientist. After 17 years at Los Alamos, Ruy moved to the University of Lisbon Medical School, Portugal. He is an expert in modeling viral infections, including influenza, HIV, and hepatitis C. Ruy has worked extensively with experimental scientists to develop models that can be useful for data interpretation, quantitative predictions and increasing our understanding of biological phenomena. He is the author of over 100 peer-reviewed publications in clinical, experimental and theoretical biology journals.