Host specialization within a phytophagous insect community : The case of Tephritidae species in La Réunion 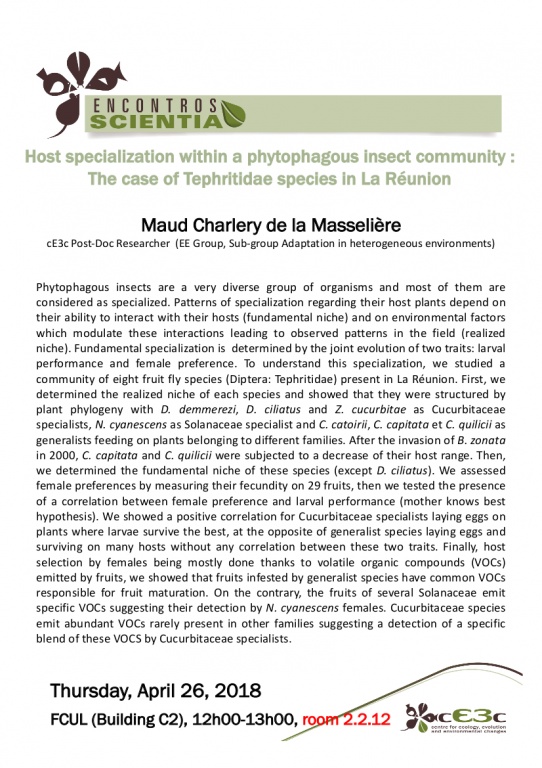 Host specialization within a phytophagous insect community :  The case of Tephritidae species in La Réunion

Phytophagous insects are a very diverse group of organisms and most of them are considered as specialized. Patterns of specialization regarding their host plants depend on their ability to interact with their hosts (fundamental niche) and on environmental factors which modulate these interactions leading to observed patterns in the field (realized niche). Fundamental specialization is  determined by the joint evolution of two traits: larval performance and female preference. To understand this specialization, we studied a community of eight fruit fly species (Diptera: Tephritidae) present in La Réunion. First, we determined the realized niche of each species and showed that they were structured by plant phylogeny with D. demmerezi, D. ciliatus and Z. cucurbitae as Cucurbitaceae specialists, N. cyanescens as Solanaceae specialist and C. catoirii, C. capitata et C. quilicii as generalists feeding on plants belonging to different families. After the invasion of B. zonata in 2000, C. capitata and C. quilicii were subjected to a decrease of their host range. Then, we determined the fundamental niche of these species (except D. ciliatus). We assessed female preferences by measuring their fecundity on 29 fruits, then we tested the presence of a correlation between female preference and larval performance (mother knows best hypothesis). We showed a positive correlation for Cucurbitaceae specialists laying eggs on plants where larvae survive the best, at the opposite of generalist species laying eggs and surviving on many hosts without any correlation between these two traits. Finally, host selection by females being mostly done thanks to volatile organic compounds (VOCs) emitted by fruits, we showed that fruits infested by generalist species have common VOCs responsible for fruit maturation. On the contrary, the fruits of several Solanaceae emit specific VOCs suggesting their detection by N. cyanescens females. Cucurbitaceae species emit abundant VOCs rarely present in other families suggesting a detection of a specific blend of these VOCS by Cucurbitaceae specialists.