Conservation of Sado estuary bottlenose dolphins population – What can we learn from that? 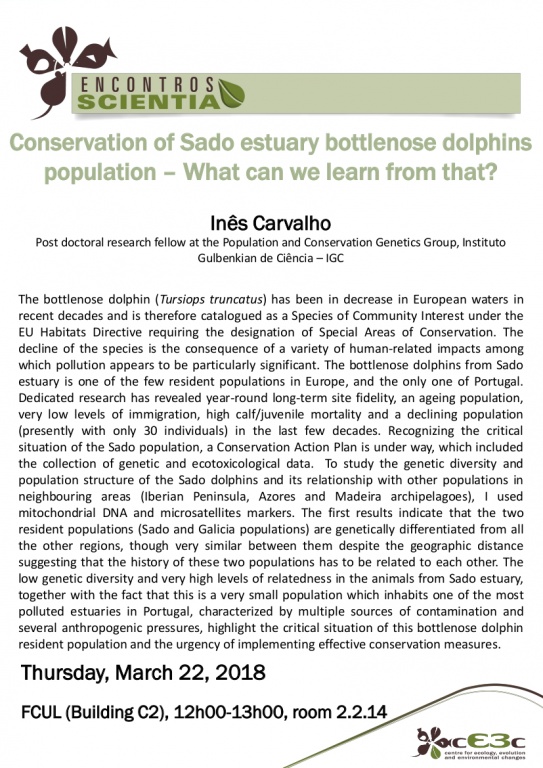 Conservation of Sado estuary bottlenose dolphins population – What can we learn from that?

The bottlenose dolphin (Tursiops truncatus) has been in decrease in European waters in recent decades and is therefore catalogued as a Species of Community Interest under the EU Habitats Directive requiring the designation of Special Areas of Conservation. The decline of the species is the consequence of a variety of human-related impacts among which pollution appears to be particularly significant. The bottlenose dolphins from Sado estuary is one of the few resident populations in Europe, and the only one of Portugal. Dedicated research has revealed year-round long-term site fidelity, an ageing population, very low levels of immigration, high calf/juvenile mortality and a declining population (presently with only 30 individuals) in the last few decades. Recognizing the critical situation of the Sado population, a Conservation Action Plan is under way, which included the collection of genetic and ecotoxicological data.  To study the genetic diversity and population structure of the Sado dolphins and its relationship with other populations in neighbouring areas (Iberian Peninsula, Azores and Madeira archipelagoes), I used mitochondrial DNA and microsatellites markers. The first results indicate that the two resident populations (Sado and Galicia populations) are genetically differentiated from all the other regions, though very similar between them despite the geographic distance suggesting that the history of these two populations has to be related to each other. The low genetic diversity and very high levels of relatedness in the animals from Sado estuary, together with the fact that this is a very small population which inhabits one of the most polluted estuaries in Portugal, characterized by multiple sources of contamination and several anthropogenic pressures, highlight the critical situation of this bottlenose dolphin resident population and the urgency of implementing effective conservation measures.