Polyandry and host-endosymbiont conflicts in the spider mite Tetranychus urticae 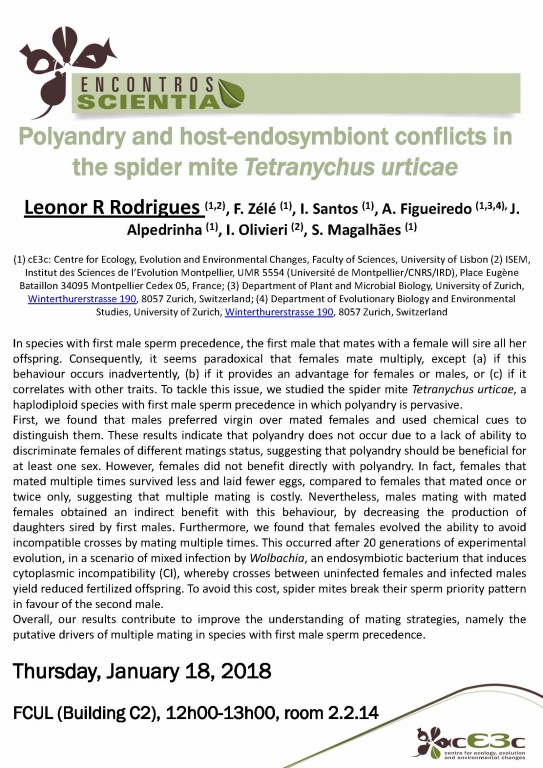 Polyandry and host-endosymbiont conflicts in the spider mite Tetranychus urticae

In species with first male sperm precedence, the first male that mates with a female will sire all her offspring. Consequently, it seems paradoxical that females mate multiply, except (a) if this behaviour occurs inadvertently, (b) if it provides an advantage for females or males, or (c) if it correlates with other traits. To tackle this issue, we studied the spider mite Tetranychus urticae, a haplodiploid species with first male sperm precedence in which polyandry is pervasive.

First, we found that males preferred virgin over mated females and used chemical cues to distinguish them. These results indicate that polyandry does not occur due to a lack of ability to discriminate females of different matings status, suggesting that polyandry should be beneficial for at least one sex. However, females did not benefit directly with polyandry. In fact, females that mated multiple times survived less and laid fewer eggs, compared to females that mated once or twice only, suggesting that multiple mating is costly. Nevertheless, males mating with mated females obtained an indirect benefit with this behaviour, by decreasing the production of daughters sired by first males. Furthermore, we found that females evolved the ability to avoid incompatible crosses by mating multiple times. This occurred after 20 generations of experimental evolution, in a scenario of mixed infection by Wolbachia, an endosymbiotic bacterium that induces cytoplasmic incompatibility (CI), whereby crosses between uninfected females and infected males yield reduced fertilized offspring. To avoid this cost, spider mites break their sperm priority pattern in favour of the second male.

Overall, our results contribute to improve the understanding of mating strategies, namely the putative drivers of multiple mating in species with first male sperm precedence.