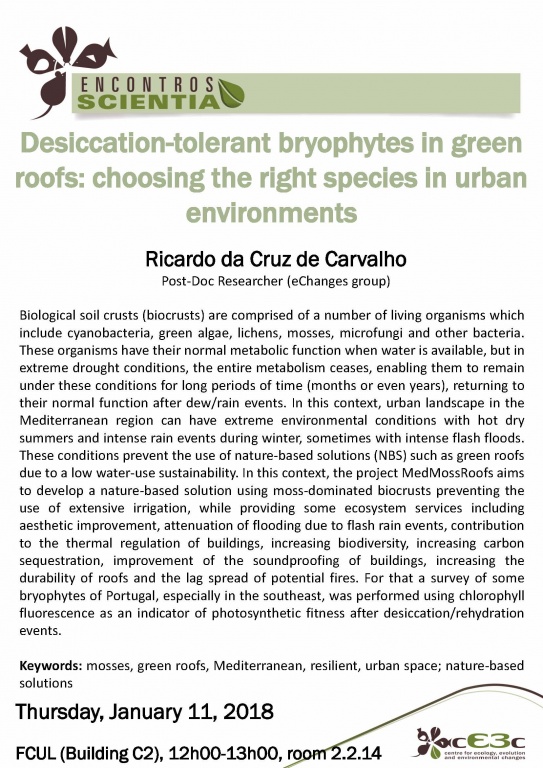 Biological soil crusts (biocrusts) are comprised of a number of living organisms which include cyanobacteria, green algae, lichens, mosses, microfungi and other bacteria. These organisms have their normal metabolic function when water is available, but in extreme drought conditions, the entire metabolism ceases, enabling them to remain under these conditions for long periods of time (months or even years), returning to their normal function after dew/rain events. In this context, urban landscape in the Mediterranean region can have extreme environmental conditions with hot dry summers and intense rain events during winter, sometimes with intense flash floods. These conditions prevent the use of nature-based solutions (NBS) such as green roofs due to a low water-use sustainability. In this context, the project MedMossRoofs aims to develop a nature-based solution using moss-dominated biocrusts preventing the use of extensive irrigation, while providing some ecosystem services including aesthetic improvement, attenuation of flooding due to flash rain events, contribution to the thermal regulation of buildings, increasing biodiversity, increasing carbon sequestration, improvement of the soundproofing of buildings, increasing the durability of roofs and the lag spread of potential fires. For that a survey of some bryophytes of Portugal, especially in the southeast, was performed using chlorophyll fluorescence as an indicator of photosynthetic fitness after desiccation/rehydration events.