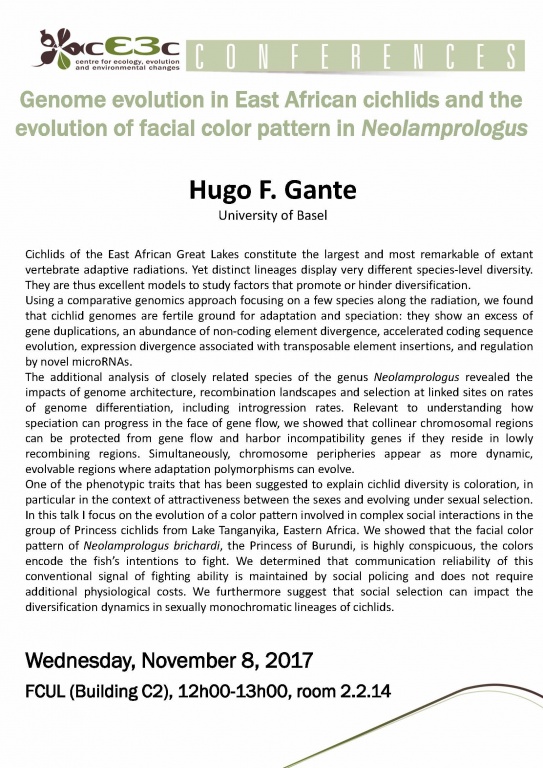 Cichlids of the East African Great Lakes constitute the largest and most remarkable of extant vertebrate adaptive radiations. Yet distinct lineages display very different species-level diversity. They are thus excellent models to study factors that promote or hinder diversification.

Using a comparative genomics approach focusing on a few species along the radiation, we found that cichlid genomes are fertile ground for adaptation and speciation: they show an excess of gene duplications, an abundance of non-coding element divergence, accelerated coding sequence evolution, expression divergence associated with transposable element insertions, and regulation by novel microRNAs.

The additional analysis of closely related species of the genus Neolamprologus revealed the impacts of genome architecture, recombination landscapes and selection at linked sites on rates of genome differentiation, including introgression rates. Relevant to understanding how speciation can progress in the face of gene flow, we showed that collinear chromosomal regions can be protected from gene flow and harbor incompatibility genes if they reside in lowly recombining regions. Simultaneously, chromosome peripheries appear as more dynamic, evolvable regions where adaptation polymorphisms can evolve.

One of the phenotypic traits that has been suggested to explain cichlid diversity is coloration, in particular in the context of attractiveness between the sexes and evolving under sexual selection. In this talk I focus on the evolution of a color pattern involved in complex social interactions in the group of Princess cichlids from Lake Tanganyika, Eastern Africa. We showed that the facial color pattern of Neolamprologus brichardi, the Princess of Burundi, is highly conspicuous, the colors encode the fish’s intentions to fight. We determined that communication reliability of this conventional signal of fighting ability is maintained by social policing and does not require additional physiological costs. We furthermore suggest that social selection can impact the diversification dynamics in sexually monochromatic lineages of cichlids.