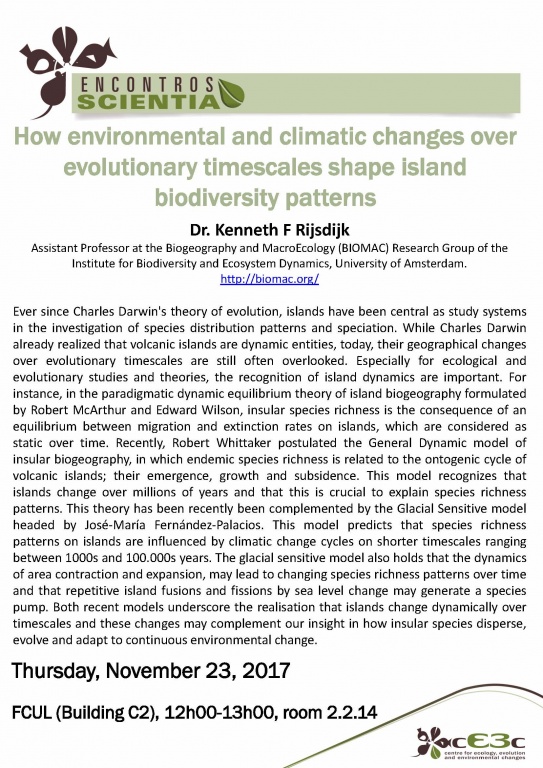 Assistant Professor at the Biogeography and MacroEcology (BIOMAC) Research Group of the Institute for Biodiversity and Ecosystem Dynamics, University of Amsterdam. http://biomac.org/

Ever since Charles Darwin's theory of evolution, islands have been central as study systems in the investigation of species distribution patterns and speciation. While Charles Darwin already realized that volcanic islands are dynamic entities, today, their geographical changes over evolutionary timescales are still often overlooked. Especially for ecological and evolutionary studies and theories, the recognition of island dynamics are important. For instance, in the paradigmatic dynamic equilibrium theory of island biogeography formulated by Robert McArthur and Edward Wilson, insular species richness is the consequence of an equilibrium between migration and extinction rates on islands, which are considered as static over time. Recently, Robert Whittaker postulated the General Dynamic model of insular biogeography, in which endemic species richness is related to the ontogenic cycle of volcanic islands; their emergence, growth and subsidence. This model recognizes that islands change over millions of years and that this is crucial to explain species richness patterns. This theory has been recently been complemented by the Glacial Sensitive model headed by José-María Fernández-Palacios. This model predicts that species richness patterns on islands are influenced by climatic change cycles on shorter timescales ranging between 1000s and 100.000s years. The glacial sensitive model also holds that the dynamics of area contraction and expansion, may lead to changing species richness patterns over time and that repetitive island fusions and fissions by sea level change may generate a species pump. Both recent models underscore the realisation that islands change dynamically over timescales and these changes may complement our insight in how insular species disperse, evolve and adapt to continuous environmental change.