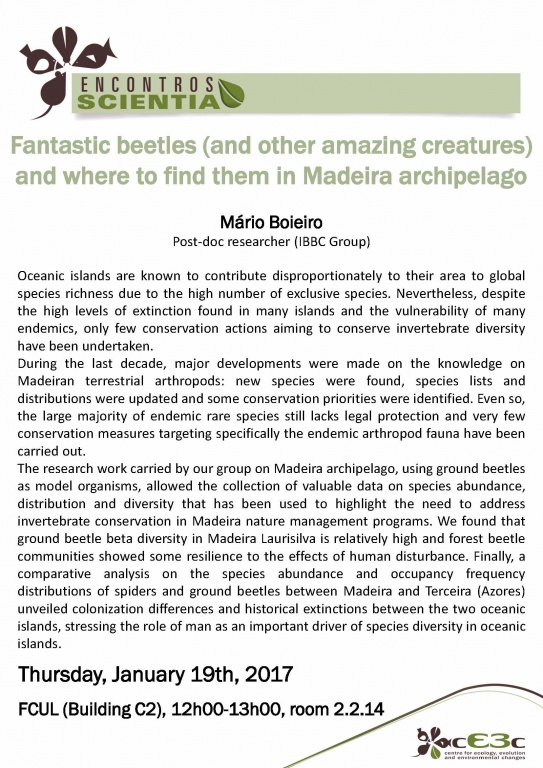 Oceanic islands are known to contribute disproportionately to their area to global species richness due to the high number of exclusive species. Nevertheless, despite the high levels of extinction found in many islands and the vulnerability of many endemics, only few conservation actions aiming to conserve invertebrate diversity have been undertaken.

During the last decade, major developments were made on the knowledge on Madeiran terrestrial arthropods: new species were found, species lists and distributions were updated and some conservation priorities were identified. Even so, the large majority of endemic rare species still lacks legal protection and very few conservation measures targeting specifically the endemic arthropod fauna have been carried out.

The research work carried by our group on Madeira archipelago, using ground beetles as model organisms, allowed the collection of valuable data on species abundance, distribution and diversity that has been used to highlight the need to address invertebrate conservation in Madeira nature management programs. We found that ground beetle beta diversity in Madeira Laurisilva is relatively high and forest beetle communities showed some resilience to the effects of human disturbance. Finally, a comparative analysis on the species abundance and occupancy frequency distributions of spiders and ground beetles between Madeira and Terceira (Azores) unveiled colonization differences and historical extinctions between the two oceanic islands, stressing the role of man as an important driver of species diversity in oceanic islands.