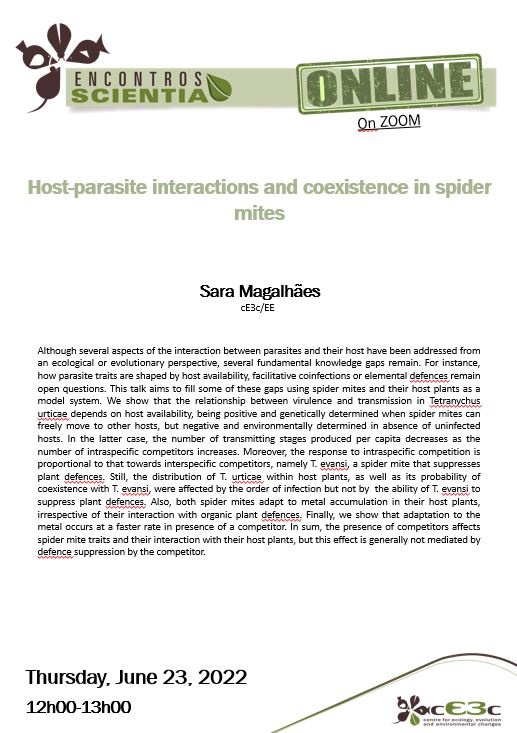 Although several aspects of the interaction between parasites and their host have been addressed from an ecological or evolutionary perspective, several fundamental knowledge gaps remain. For instance, how parasite traits are shaped by host availability, facilitative coinfections or elemental defences remain open questions. This talk aims to fill some of these gaps using spider mites and their host plants as a model system. We show that the relationship between virulence and transmission in Tetranychus urticae depends on host availability, being positive and genetically determined when spider mites can freely move to other hosts, but negative and environmentally determined in absence of uninfected hosts. In the latter case, the number of transmitting stages produced per capita decreases as the number of intraspecific competitors increases. Moreover, the response to intraspecific competition is proportional to that towards interspecific competitors, namely T. evansi, a spider mite that suppresses plant defences. Still, the distribution of T. urticae within host plants, as well as its probability of coexistence with T. evansi, were affected by the order of infection but not by  the ability of T. evansi to suppress plant defences. Also, both spider mites adapt to metal accumulation in their host plants, irrespective of their interaction with organic plant defences. Finally, we show that adaptation to the metal occurs at a faster rate in presence of a competitor. In sum, the presence of competitors affects spider mite traits and their interaction with their host plants, but this effect is generally not mediated by defence suppression by the competitor.