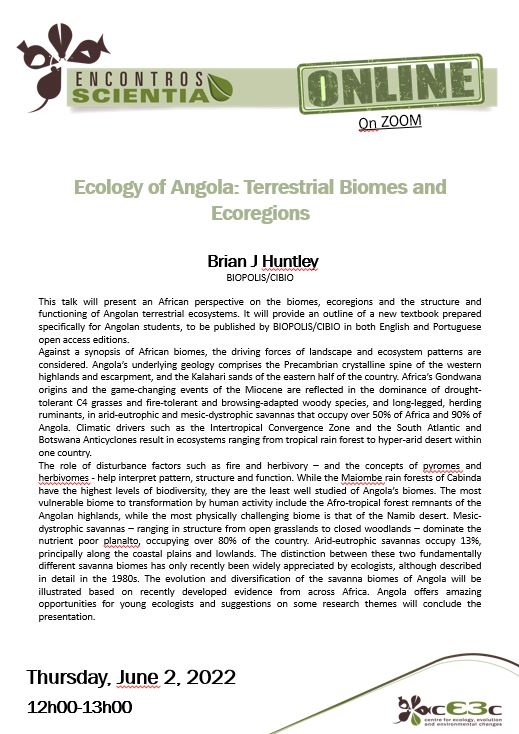 This talk will present an African perspective on the biomes, ecoregions and the structure and functioning of Angolan terrestrial ecosystems. It will provide an outline of a new textbook prepared specifically for Angolan students, to be published by BIOPOLIS/CIBIO in both English and Portuguese open access editions.

Against a synopsis of African biomes, the driving forces of landscape and ecosystem patterns are considered. Angola’s underlying geology comprises the Precambrian crystalline spine of the western highlands and escarpment, and the Kalahari sands of the eastern half of the country. Africa’s Gondwana origins and the game-changing events of the Miocene are reflected in the dominance of drought-tolerant C4 grasses and fire-tolerant and browsing-adapted woody species, and long-legged, herding ruminants, in arid-eutrophic and mesic-dystrophic savannas that occupy over 50% of Africa and 90% of Angola. Climatic drivers such as the Intertropical Convergence Zone and the South Atlantic and Botswana Anticyclones result in ecosystems ranging from tropical rain forest to hyper-arid desert within one country.

The role of disturbance factors such as fire and herbivory – and the concepts of pyromes and herbivomes - help interpret pattern, structure and function. While the Maiombe rain forests of Cabinda have the highest levels of biodiversity, they are the least well studied of Angola’s biomes. The most vulnerable biome to transformation by human activity include the Afro-tropical forest remnants of the Angolan highlands, while the most physically challenging biome is that of the Namib desert. Mesic-dystrophic savannas – ranging in structure from open grasslands to closed woodlands – dominate the nutrient poor planalto, occupying over 80% of the country. Arid-eutrophic savannas occupy 13%, principally along the coastal plains and lowlands. The distinction between these two fundamentally different savanna biomes has only recently been widely appreciated by ecologists, although described in detail in the 1980s. The evolution and diversification of the savanna biomes of Angola will be illustrated based on recently developed evidence from across Africa. Angola offers amazing opportunities for young ecologists and suggestions on some research themes will conclude the presentation.