Is there a relationship between cultural factors and the establishment of agroecological systems with different designs and their impact on soil fauna? Experiences from 4 Chilean regions. 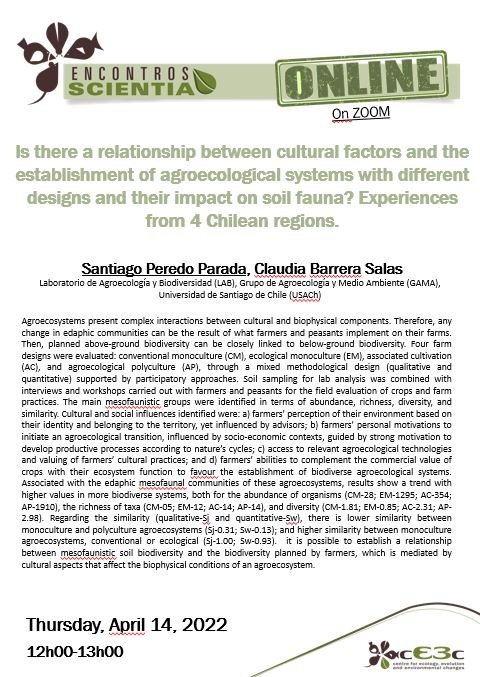 Is there a relationship between cultural factors and the establishment of agroecological systems with different designs and their impact on soil fauna? Experiences from 4 Chilean regions.

Agroecosystems present complex interactions between cultural and biophysical components. Therefore, any change in edaphic communities can be the result of what farmers and peasants implement on their farms. Then, planned above-ground biodiversity can be closely linked to below-ground biodiversity. Four farm designs were evaluated: conventional monoculture (CM), ecological monoculture (EM), associated cultivation (AC), and agroecological polyculture (AP), through a mixed methodological design (qualitative and quantitative) supported by participatory approaches. Soil sampling for lab analysis was combined with interviews and workshops carried out with farmers and peasants for the field evaluation of crops and farm practices. The main mesofaunistic groups were identified in terms of abundance, richness, diversity, and similarity. Cultural and social influences identified were: a) farmers’ perception of their environment based on their identity and belonging to the territory, yet influenced by advisors; b) farmers’ personal motivations to initiate an agroecological transition, influenced by socio-economic contexts, guided by strong motivation to develop productive processes according to nature’s cycles; c) access to relevant agroecological technologies and valuing of farmers’ cultural practices; and d) farmers’ abilities to complement the commercial value of crops with their ecosystem function to favour the establishment of biodiverse agroecological systems. Associated with the edaphic mesofaunal communities of these agroecosystems, results show a trend with higher values ​​in more biodiverse systems, both for the abundance of organisms (CM-28; EM-1295; AC-354; AP-1910), the richness of taxa (CM-05; EM-12; AC-14; AP-14), and diversity (CM-1.81; EM-0.85; AC-2.31; AP-2.98). Regarding the similarity (qualitative-Sj and quantitative-Sw), there is lower similarity between monoculture and polyculture agroecosystems (Sj-0.31; Sw-0.13); and higher similarity between monoculture agroecosystems, conventional or ecological ​​(Sj-1.00; Sw-0.93).  it is possible to establish a relationship between mesofaunistic soil biodiversity and the biodiversity planned by farmers, which is mediated by cultural aspects that affect the biophysical conditions of an agroecosystem.