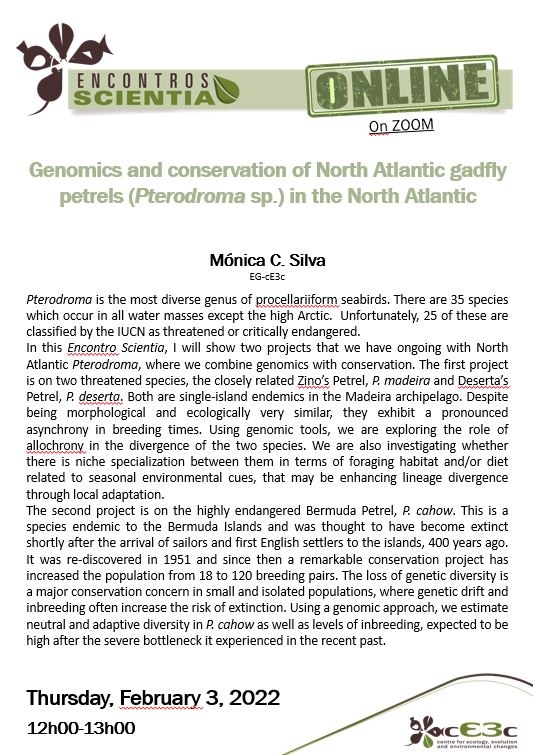 Pterodroma is the most diverse genus of procellariiform seabirds. There are 35 species which occur in all water masses except the high Arctic.  Unfortunately, 25 of these are classified by the IUCN as threatened or critically endangered.

In this Encontro Scientia, I will show two projects that we have ongoing with North Atlantic Pterodroma, where we combine genomics with conservation. The first project is on two threatened species, the closely related Zino’s Petrel, P. madeira and Deserta’s Petrel, P. deserta. Both are single-island endemics in the Madeira archipelago. Despite being morphological and ecologically very similar, they exhibit a pronounced asynchrony in breeding times. Using genomic tools, we are exploring the role of allochrony in the divergence of the two species. We are also investigating whether there is niche specialization between them in terms of foraging habitat and/or diet related to seasonal environmental cues, that may be enhancing lineage divergence through local adaptation.

The second project is on the highly endangered Bermuda Petrel, P. cahow. This is a species endemic to the Bermuda Islands and was thought to have become extinct shortly after the arrival of sailors and first English settlers to the islands, 400 years ago. It was re-discovered in 1951 and since then a remarkable conservation project has increased the population from 18 to 120 breeding pairs. The loss of genetic diversity is a major conservation concern in small and isolated populations, where genetic drift and inbreeding often increase the risk of extinction. Using a genomic approach, we estimate neutral and adaptive diversity in P. cahow as well as levels of inbreeding, expected to be high after the severe bottleneck it experienced in the recent past.