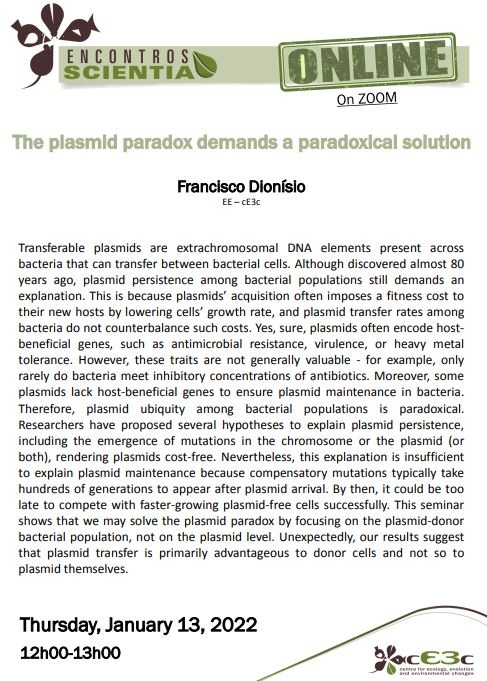 Transferable plasmids are extrachromosomal DNA elements present across bacteria that can transfer between bacterial cells. Although discovered almost 80 years ago, plasmid persistence among bacterial populations still demands an explanation. This is because plasmids’ acquisition often imposes a fitness cost to their new hosts by lowering cells’ growth rate, and plasmid transfer rates among bacteria do not counterbalance such costs. Yes, sure, plasmids often encode hostbeneficial genes, such as antimicrobial resistance, virulence, or heavy metal tolerance. However, these traits are not generally valuable - for example, only rarely do bacteria meet inhibitory concentrations of antibiotics. Moreover, some plasmids lack host-beneficial genes to ensure plasmid maintenance in bacteria. Therefore, plasmid ubiquity among bacterial populations is paradoxical. Researchers have proposed several hypotheses to explain plasmid persistence, including the emergence of mutations in the chromosome or the plasmid (or both), rendering plasmids cost-free. Nevertheless, this explanation is insufficient to explain plasmid maintenance because compensatory mutations typically take hundreds of generations to appear after plasmid arrival. By then, it could be too late to compete with faster-growing plasmid-free cells successfully. This seminar shows that we may solve the plasmid paradox by focusing on the plasmid-donor bacterial population, not on the plasmid level. Unexpectedly, our results suggest that plasmid transfer is primarily advantageous to donor cells and not so to plasmid themselves.