Evolutionary dynamics in regions of low recombination: revisiting old ideas in the light of genomic data 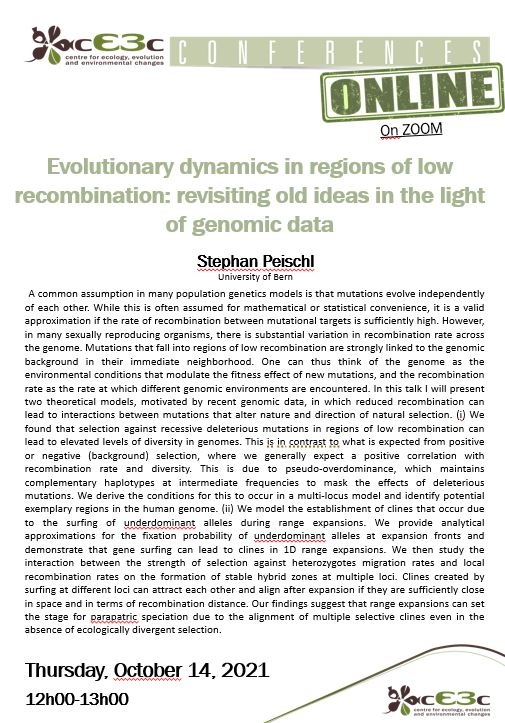 Evolutionary dynamics in regions of low recombination: revisiting old ideas in the light of genomic data

A common assumption in many population genetics models is that mutations evolve independently of each other. While this is often assumed for mathematical or statistical convenience, it is a valid approximation if the rate of recombination between mutational targets is sufficiently high. However, in many sexually reproducing organisms, there is substantial variation in recombination rate across the genome. Mutations that fall into regions of low recombination are strongly linked to the genomic background in their immediate neighborhood. One can thus think of the genome as the environmental conditions that modulate the fitness effect of new mutations, and the recombination rate as the rate at which different genomic environments are encountered. In this talk I will present two theoretical models, motivated by recent genomic data, in which reduced recombination can lead to interactions between mutations that alter nature and direction of natural selection. (i) We found that selection against recessive deleterious mutations in regions of low recombination can lead to elevated levels of diversity in genomes. This is in contrast to what is expected from positive or negative (background) selection, where we generally expect a positive correlation with recombination rate and diversity. This is due to pseudo-overdominance, which maintains complementary haplotypes at intermediate frequencies to mask the effects of deleterious mutations. We derive the conditions for this to occur in a multi-locus model and identify potential exemplary regions in the human genome. (ii) We model the establishment of clines that occur due to the surfing of underdominant alleles during range expansions. We provide analytical approximations for the fixation probability of underdominant alleles at expansion fronts and demonstrate that gene surfing can lead to clines in 1D range expansions. We then study the interaction between the strength of selection against heterozygotes migration rates and local recombination rates on the formation of stable hybrid zones at multiple loci. Clines created by surfing at different loci can attract each other and align after expansion if they are sufficiently close in space and in terms of recombination distance. Our findings suggest that range expansions can set the stage for parapatric speciation due to the alignment of multiple selective clines even in the absence of ecologically divergent selection.