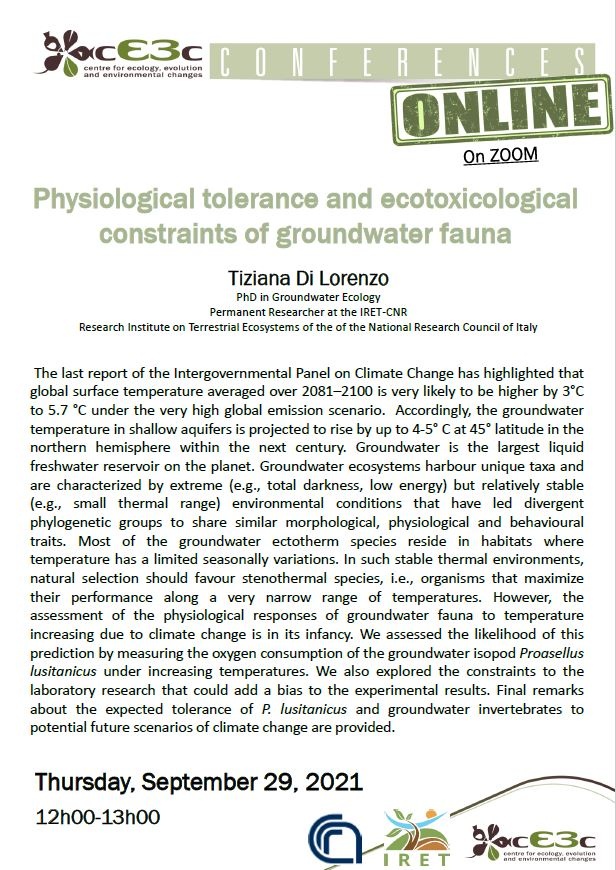 Tiziana Di Lorenzo (PhD in Groundwater Ecology. Permanent Researcher at the IRET-CNR Research Institute on Terrestrial Ecosystems of the of the National Research Council of Italy)

The last report of the Intergovernmental Panel on Climate Change has highlighted that global surface temperature averaged over 2081 2100 is very likely to be higher by 3°C to 5.7°C under the very high global emissions cenario. Accordingly, the ground water temperature in shallow aquifers is projected to rise by up to 4-5°C at 45° latitude in the northern hemisphere within the next century. Groundwater is the largest liquid freshwater reservoir on the planet. Ground water ecosystems harbour unique taxa and are characterized by extreme (e.g., total darkness, low energy) but relatively stable (e.g., small thermal range) environmental conditions that have led divergent phylogenetic groups to share similar morphological, physiological and behavioural traits. Most of the groundwater ectotherm species reside in habitats where temperature has a limited seasonally variations. In such stable thermal environments, natural selection should favour stenothermal species, i.e., organisms that maximize their performance along a very narrow range of temperatures. However, the assessment of the physiological responses of groundwater fauna to temperature increasing due to climate change is in its infancy. We assessed the likelihood of this prediction by measuring the oxygen consumption of the groundwater isopod Proasellus lusitanicus under increasing temperatures. We also explored the constraints to the laboratory research that could add a bias to the experimental results. Final remarks about the expected tolerance of P.lusitanicus and groundwater invertebrates to potential future scenarios of climate change are provided.