How do leaf carbon and nitrogen contents of oak hosts affect the heterotrophic level of Loranthus europaeus? Insights from stable isotope ecophysiology assays 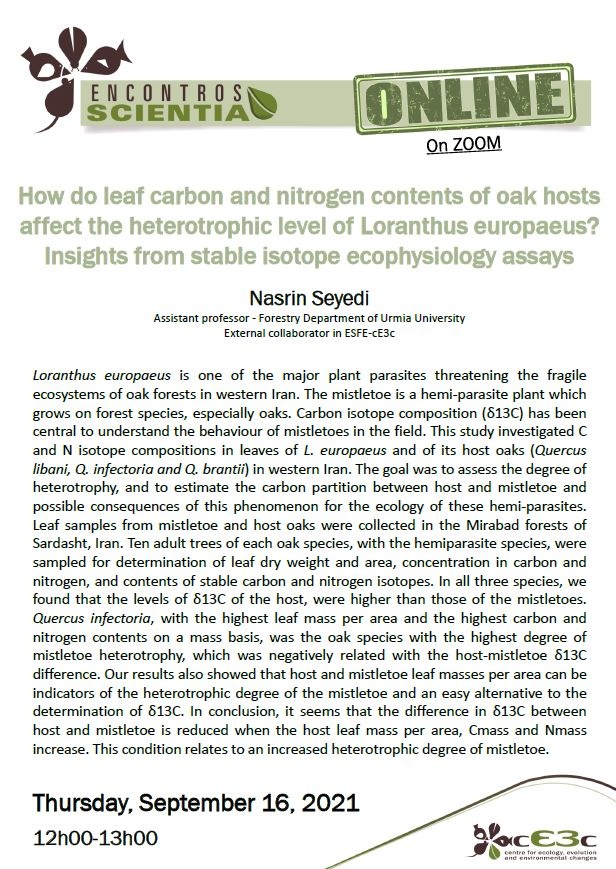 How do leaf carbon and nitrogen contents of oak hosts affect the heterotrophic level of Loranthus europaeus? Insights from stable isotope ecophysiology assays

Loranthus europaeus is one of the major plant parasites threatening the fragile ecosystems of oak forests in western Iran. The mistletoe is a hemi-parasite plant which grows on forest species, especially oaks. Carbon isotope composition (δ13C) has been central to understand the behaviour of mistletoes in the field. This study investigated C and N isotope compositions in leaves of L. europaeus and of its host oaks (Quercus libani, Q. infectoria and Q. brantii) in western Iran. The goal was to assess the degree of heterotrophy, and to estimate the carbon partition between host and mistletoe and possible consequences of this phenomenon for the ecology of these hemi-parasites. Leaf samples from mistletoe and host oaks were collected in the Mirabad forests of Sardasht, Iran. Ten adult trees of each oak species, with the hemiparasite species, were sampled for determination of leaf dry weight and area, concentration in carbon and nitrogen, and contents of stable carbon and nitrogen isotopes. In all three species, we found that the levels of δ13C of the host, were higher than those of the mistletoes. Quercus infectoria, with the highest leaf mass per area and the highest carbon and nitrogen contents on a mass basis, was the oak species with the highest degree of mistletoe heterotrophy, which was negatively related with the host-mistletoe δ13C difference. Our results also showed that host and mistletoe leaf masses per area can be indicators of the heterotrophic degree of the mistletoe and an easy alternative to the determination of δ13C. In conclusion, it seems that the difference in δ13C between host and mistletoe is reduced when the host leaf mass per area, Cmass and Nmass increase. This condition relates to an increased heterotrophic degree of mistletoe.