Conservation of an Amazonian Savannah using mammals as models 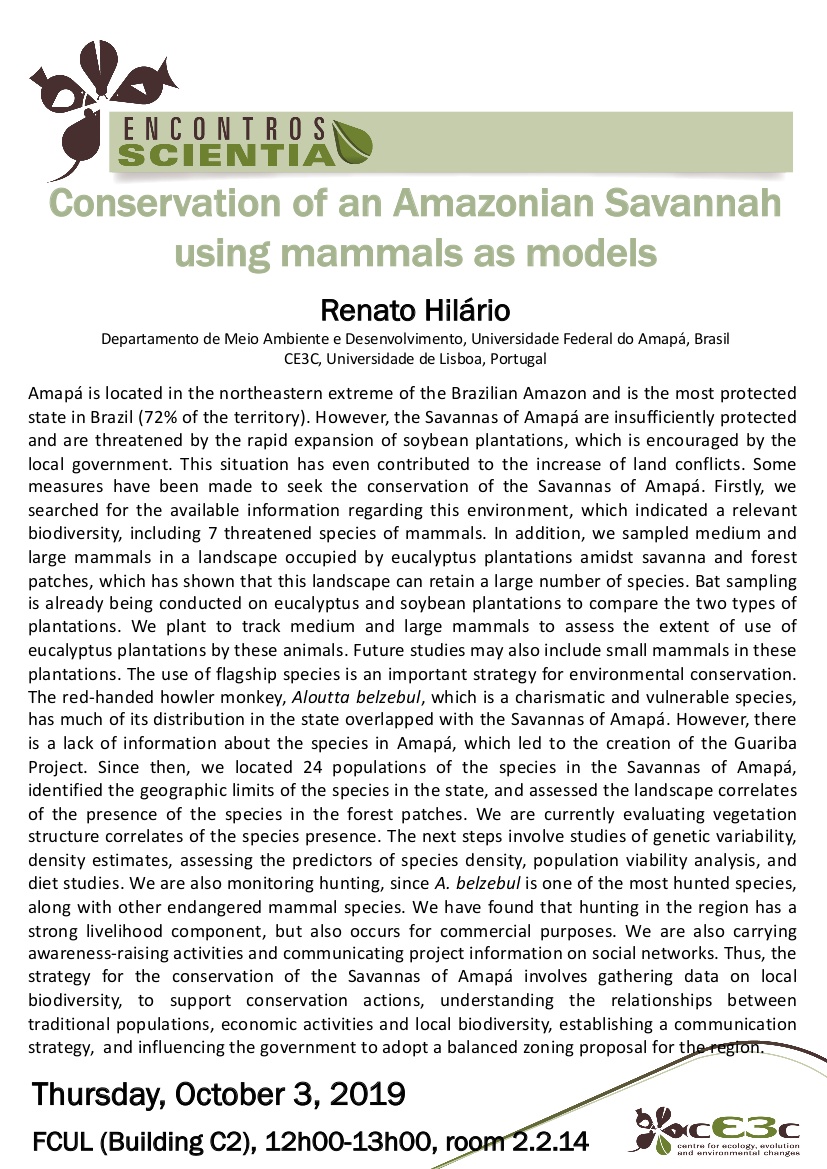 Conservation of an Amazonian Savannah using mammals as models

Amapá is located in the northeastern extreme of the Brazilian Amazon and is the most protected state in Brazil (72% of the territory). However, the Savannas of Amapá are insufficiently protected and are threatened by the rapid expansion of soybean plantations, which is encouraged by the local government. This situation has even contributed to the increase of land conflicts. Some measures have been made to seek the conservation of the Savannas of Amapá. Firstly, we searched for the available information regarding this environment, which indicated a relevant biodiversity, including 7 threatened species of mammals. In addition, we sampled medium and large mammals in a landscape occupied by eucalyptus plantations amidst savanna and forest patches, which has shown that this landscape can retain a large number of species. Bat sampling is already being conducted on eucalyptus and soybean plantations to compare the two types of plantations. We plant to track medium and large mammals to assess the extent of use of eucalyptus plantations by these animals. Future studies may also include small mammals in these plantations. The use of flagship species is an important strategy for environmental conservation. The red-handed howler monkey, Aloutta belzebul, which is a charismatic and vulnerable species, has much of its distribution in the state overlapped with the Savannas of Amapá. However, there is a lack of information about the species in Amapá, which led to the creation of the Guariba Project. Since then, we located 24 populations of the species in the Savannas of Amapá, identified the geographic limits of the species in the state, and assessed the landscape correlates of the presence of the species in the forest patches. We are currently evaluating vegetation structure correlates of the species presence. The next steps involve studies of genetic variability, density estimates, assessing the predictors of species density, population viability analysis, and diet studies. We are also monitoring hunting, since A. belzebul is one of the most hunted species, along with other endangered mammal species. We have found that hunting in the region has a strong livelihood component, but also occurs for commercial purposes. We are also carrying awareness-raising activities and communicating project information on social networks. Thus, the strategy for the conservation of the Savannas of Amapá involves gathering data on local biodiversity, to support conservation actions, understanding the relationships between traditional populations, economic activities and local biodiversity, establishing a communication strategy, and influencing the government to adopt a balanced zoning proposal for the region.