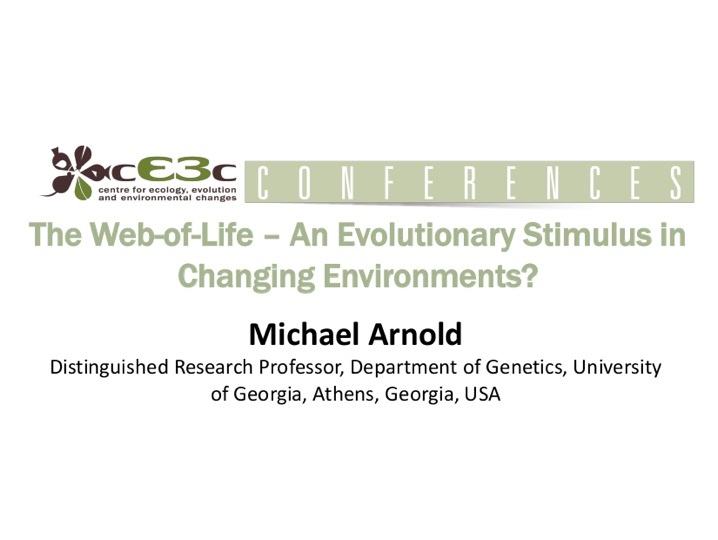 The Web-of-Life – An Evolutionary Stimulus in Changing Environments?

“One of the most spectacular facets of the newer studies of evolution has been the demonstration that evolution has not proceeded by slow, even steps but that seen in the large there have been bursts of creative activity.” With this provocative statement, Anderson and Stebbins (1954) began their description of Hybridization as an Evolutionary Stimulus. Their arguments concerning the role of natural hybridization in promoting evolutionary innovations emphasized the catalyst of genetic admixture leading to introgressed genomes and hybrid species. In particular, they predicted that recombination between divergent genomes had provided the material necessary for natural selection to rapidly produce novel phenotypes capable of invading the niches opened during climatic perturbations. In this seminar, I will consider “climate change” to include environmental fluctuations caused by climatic shifts or by dispersal to a different habitat regime; it includes both micro- and macro-habitat modifications. This broadened definition is chosen intentionally in order to reflect how temporally- and geographically- widespread climate change has been and thus how often it catalyzes evolutionary innovations through associated genetic exchange. In addition to the conceptual breadth provided by this definition, I will highlight the organismic diversity reflecting genetic admixture during climate perturbations by discussing examples from across different domains of life. Using a diversity of clades I will thus illustrate the creative outcomes of genetic admixture associated with climatic shifts, including adaptive evolutionary change and biodiversification (as reflected by the origin of single evolutionary lineages as well as entire adaptive radiations).