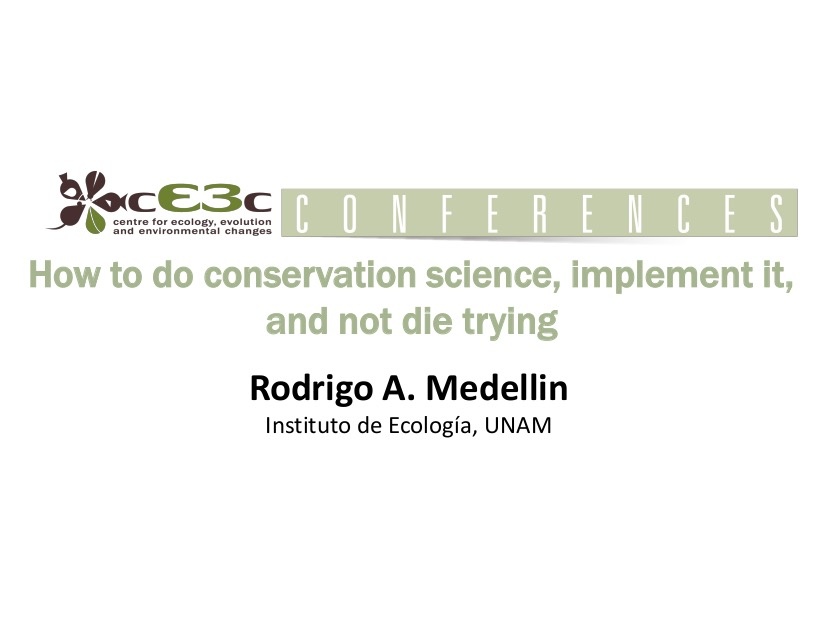 How to do conservation science, implement it and not die trying

Conducting research for conservation is, unfortunately, too often cut short or rarely implemented. Scientists are losing credibility and science losing relevance for policy. I will discuss three examples of research projects that have become official federal government programs with nation-wide implications. Mexico is the fifth country with the greatest biodiversity in the world. Challenges are thick and plentiful. Recently Mexico became the first country in the world to have an estimate of how many jaguars inhabit the country and the National Jaguar Strategy is fully in place and being implemented today. Bats represent about one-fourth of Mexico’s mammals and they include critically endangered and endangered species. The bighorn sheep is a charismatic species that has become a landmark for sustainable development and conservation via a sustainable use program led and coordinated by an indigenous group. The lesser long-nosed bat has been a focal species for my research and after 20 years it was recently delisted from Mexico’s Endangered Species List. The recovery implied lots of research, education, and specific conservation actions. The job of conservation professionals must include working with government and public to be effective.

This conference will be broadcasted via videoconference to Azores: