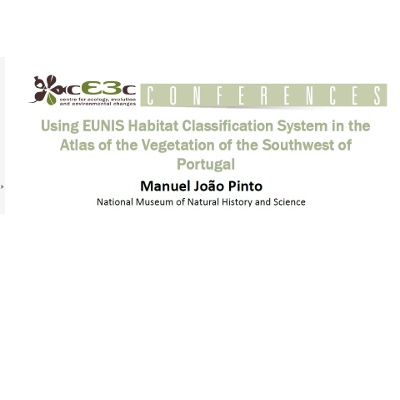 European Nature Information System EUNIS (Davies et al. 2004) has provided a relevant scheme for marine, freshwater and terrestrial habitat description applicable to a pan-European scale, cross-walking different scientific perspectives and delivering common useful meeting-points for vegetation analysis and prediction. This system is a comprehensive hierarchical approach aiming the identification of a large number of habitats, including the artificially man-made and cultural vegetation, guaranteeing equity when assessing, documenting. monitoring and reporting habitats in a comparable manner across Europe, in most particular, under the EU Habitats Directive and Bern Convention. It is also the strongest reference framework for the INSPIRE Directive (2007), which was set up to establish an infrastructure for spatial information in Europe. A novel feature of this hierarchical classification, is the development of criteria based on environmental parameters, forming a key for identification of habitats analogous to keys for identification of species. At level 3 and above, EUNIS system encompasses a great diversity of habitats relying upon vegetation physiognomies and plant assemblages typified by a short description of diagnostic traits. These traits may include environmental and geographic circumstances that are expected to endorse a particular biotic response and forecast species occurrences that form the vegetation.

During the preparation of the Atlas of the Vegetation of the Southwest, from ground truth plot-plant assemblages and single species georeferencing, habitat mapping gained accuracy by the help of supervised machine learning techniques, modeling the combination of attributes that better match and predict a particular listed habitat in the EUNIS catalog. Attributes were gathered into categorical broad variables, which include landcover, geo-pedodiversity, physiography, potential evapotranspiration, soil moisture, latitude and altitude zonation, obtained from pre-existing coverages or computed from spectral products delivered by remote sensors. Particular effort was dedicated to single species mapping when these plants were key for the diagnose of listed habitats and change dramatically their abundance across distribution range, despite locally/regionally abundant. The previous decomposition of the study area in homogeneous territories according to the expectancy of finding target habitats, allowed spatially cognition and better learning models from smaller training data sets, ultimately reducing global uncertainty.

The vegetation map produced is formed by 19615 digitized units, completely adjacent polygons and polyline segments vector coverages, occupying a planar area of 282 thousand hectares, draping a territory of 165 x 20 km stretched along the Portuguese southwest coast, formed by dry and waterlogging plains and smooth mountains, with their highest point above sea level at 500m. 788 terrestrial habitats and 1 marine habitat were uncovered comprising elements up to commonly level 4 and 5. Higher order habitats were also detected as well as 7 types of Habitat complexes.