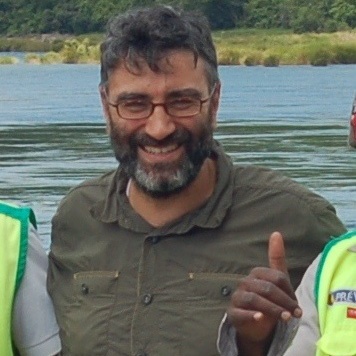 I received a Ph.D. in Biodiversity (Freshwater Fishes) from the University of Lisbon (Faculty of Sciences) in 2013 and I am collaborating in several topics with the Natural History and Systematics Research Group and Animal Biodiversity, Evolution and Systematics Subgroup of cE3c. My research focuses mostly on systematics and taxonomy of southern African freshwater fishes.

For many years I have been involved in ecological research on Portuguese freshwater fishes. Currently, I am focusing my research on systematics and taxonomy of southern African freshwater fishes, with particular interest on Angola and Mozambique ichthyofauna. I am also collaborating on several projects with other colleagues from major natural history museums housing African fish collections, namely Royal Museum for Central Africa (RMCA, Belgium) and South African Institute for Aquatic Biodiversity (SAIAB, South Africa), combining morphologic and phylogenetic approaches on smaller complex fishes groups.

My current research is driven mostly by three overarching objectives: i) contribute to the taxonomy and systematics of freshwater fishes, based on morphologic and phylogenetic approaches; ii) understand and define the phylogeography and historical biogeography of southern African freshwater fishes species; and iii) understand and define the processes underpinning aquatic biodiversity for conservation purposes.

Presently, I am a Scientific Officer in the project “FishBase for Africa” at the Royal Museum for Central Africa (RMCA, Tervuren, Belgium). I am involved in several topics: 1) updating Fishbase information data and IUCN assessments of African freshwater species; 2) organising the 2016 local Fishbase training (in collaboration with the National Museum of Kenya); 3) producing field guide compiled and based on FishBase data; and 4) updating the information of the book “The Fresh and Brackish Water Fishes of West Africa”