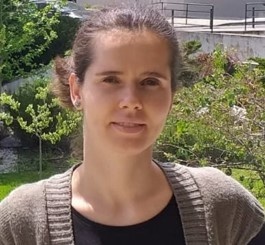 I did my PhD at the University of Oxford, in the UK, on the role of DNA damage responses in maintaining genomic stability and preventing tumorigenesis. During this period, I focused on understanding which DNA repair pathways and associated proteins are required for the repair of uncapped telomeres. I have also studied the senescence mechanisms associated with BRCA2 mutations.

Upon completion of my PhD in 2013, I moved back to Portugal, where I did my postdoctoral research at Instituto Gulbenkian Ciência. There I studied the importance of disease tolerance mechanisms, in particular iron-responsive mechanisms and metabolic adaptation, in the context of infection.

Now as an Assistant Researcher at the Development and Evolutionary Morphogenesis (DEM) group at the cE3c, Faculdade de Ciencias Universidade de Lisboa, I am studying the importance of preserving extracellular matrix (ECM) integrity in order to prevent disease onset and progression, for example due to the presence of oxidative stress and DNA damage, which may subsequentially trigger different cell fate mechanisms.

My lines of research focus on: